If You Play Not to Lose, You'll Lose 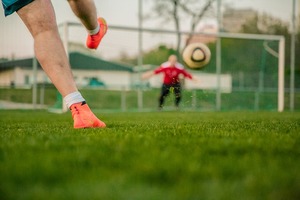 Jim Furyk did his level best not to lose the U.S. Open Golf Championship, and he would up doing exactly that: losing it. That's because he didn't try to win it, merely not to lose it when he had the lead.

Football teams in the U.S., when leading near the end of the game, often establish a "prevent defense" designed to allow the opponents to move the ball but not score, rather than continuing the aggressive play that generated the lead. What often happens, of course, is in moving the ball so well the opponents DO score and go on to win the game.

The least successful sales people try not to lose the business that they already have instead of trying to expand it and exploit it. They allow for unreasonable deals to be made, lower prices conceded, and more work delivered than is necessary. They crawl and grovel rather than sit eye-to-eye with buyer across the desk.

There are people who lead their lives so as nothing bad will happen to them, never taking even prudent risk or a carefree gamble. These are the people who get caught in the tailwind of people racing by them. I recall leaving the corporate arena to go out on my own, and my erstwhile friends said, "You'll probably make more money than we will, but we'll have far more security." Well, guess what? I did make more money but also have far more security.

Since when is "hunkering down" a way to lead one's short existence in an unfathomable universe on a huge rock racing around an exploding star?

If you play only "sure bets" at poker, you'll lose your shirt. No one is going to be promoted at work for staying off the radar screen. Medals aren't awarded to those who preserve a crisp and clean uniform. They go to the people who are dirty and bloodied and fought in the war.

I'm not about to tell you to bet the family farm on a roll of the dice. But I am telling you that unless you are assertive and bold in life and work you will be relegated to the "also rans." Those horses don't even go out to stud.

Wake up, smell the roses, grab the roses, and go romance life itself. If you're not trying to win, you're going to lose.

Alan Weiss is a man of many talents as he is not only a consultant, but also a speaker and an author. He is the founder of Summit Consulting Group where has has attracted a multitude of clients in the Fortune 500. His writing has been expansive as he has over 500 published articles in addition to his 44 published books. In addition, he has received numerous awards and accolades for his public speaking. Do you want to read more of Alan Weiss? You can read more on his blog at Contrarian Consulting. © Alan Weiss 2012. All rights reserved.